Paintings from The Collection of the City of Graz

An exhibition of Kulturvermittlung Steiermark with kind support of the City of Graz and the Austrian Cultural Forum Zagreb.

Please take note that due to the COVID-19 pandemic the dates may change.

Painting is always an issue. Even if contemporary art does not think in classic categories, painting remains current and in demand. This is also true for the art collection of the City of Graz, which is both, a promotional tool and an “art library for all employees of the municipal authorities and the facilities close to the city. The selection shows a cross-section, which does not want to be representative, but should provide and insight from the perspective of the Graz Collection into the variety of works with the medium of painting.

For many years, the Kulturvermittlung Steiermark has presented works by Graz artists in various cities in Croatia in cooperation with the Austrian Cultural Forum in Zagreb. In December 2019, this exhibition of recent art-acquisitions from the field of paiting was opened in Zagreb in cooperation with the cultural department of the City of Graz and should be on view there until March 2020. After the Corona break, this exhibition now moves on to the Gallery Oranžerija of the City Museum Vukovar in Castle Eltz.

Kamilla Bischof, born in Graz in 1986, attended the school for artistic photography Friedl Kubelka and completed 2015 studies in painting at the Academy of Fine Arts Vienna (Amelie von Wulffen et al.) and at the University of Applied Arts Vienna (Johanna Kandl).

Kamilla Bischof’s painting is based on reality, from which she develops subjective, symbolic-associative and fantastic scenarios. Concrete and symbolic set pieces of a collective visual memory emerge from color-intensive, abstract background compositions.

Jon Maximilian Leander Davis, born in Graz in 1990, graduated from the commercial academy and worked in the field of marketing, advertising and graphics for the first few years. As an artist he is autodidact.

Davis’ painting are spaces of thought between reality and the abstract. Within this intermediate level a subject or a picture is methodically represented. It is important to Davis that a space of meaning is created that serves the cause but also dissolves by always leaving questions unanswered.

Silvia Ederer, born in Graz in 1972, graduated from the Vienna Academy of Fine Arts (Eva Schlegel) in 2002.

The paintings of Silvia Ederer are convincing in conceptual and technical terms and they are usually characterized by an overwhelming contrast of light and dark. The artist principally works in series, her way of working can be described with the terms “photography – painting – light”: “When I paint, I often work with my own photos. I treat this source material on the computer until I finally feel like painting it on the canvas by myself. […] The end product of this process is completely washed and flung.”

When Wilfried Skreiner (director of Neue Galerie Graz) propagated the term “New Painting” in the 1980s, Hutter was also part of this movement. Peter Hutter’s expressive painting with figurative inclusions is often characterized by an existential severity conveyed by color and motif. Peter Hutter works in the fields of visual arts, music and spatial staging. All of Hutter’s work shows interest in the possibilities of the respective technical means. In painting he experiments with ambient solutions that convey transparency, space, simultaneity and contradiction.

Landscapes, still lifes and interiors are the main motifs of Erika Lässer-Rotter, born in Hohenems / Vorarlberg in 1961. She came to Graz in the 1980s and attended the master class for painting at HTBLVA Ortweinschule Graz (with Gerhard Lojen) from 1985.

Erika Läasser-Rotter’s pictures show a very characteristic painterly handwriting: the color nuances, the brush stroke, the color transitions, the mood of light, the tension between surface and space. In the compositions, the (nature)-model seems to dissolve and, exploring the limits of abstraction, reassemble again.
The works shown in this exhibition were created during a residence in Chicago.

Andrea Markart lives and works in Graz, she is a painter and illustrator. She also works as an art trainer and publishes children’s books.
In her work she deals with the questioning of the position of man. Her (fantasy-)creatures are symbolic and sometimes “ghostly”.

Born in 1958, studies of architecture in Graz and textile design at the Vienna art academies.

In the pictures of Undine Pega quotations of reality are merging with painterly pictorial spaces into an organic whole. With her characteristic poetic visual vocabulary, Undine Pega is a constant and stable part of the Graz art scene. “In painting, I mainly deal with researching moods. I am interested in illumination what is apparently unexciting, sharpening the harmonic, relating the contradictory, connecting things that at first glance do not belong together.”

Hannes Priesch, born in 1954 in Volkersdorf / Styria, graduated 1977 at the Academy of Fine Arts in Vienna (with Max Weiler) and stayed there from 1978 to 1980 as a lecturer. In 1990 he received an Austrian state-scholarship in Chicago. Priesch lives in New York and Semriach / Styria.

Verena Preininger, born in Graz in 1988, graduated from the HTBLVA Graz Ortweinschule for Arts and Design (ceramics). She studied at the University of Applied Arts Vienna (class for painting and animation witch Judith Eisler).

The connection to nature seems to be the basis of Preininger’s work. In addiction to hybrid beings and animals, she also dedicates herself to personifications, such as the “Excess” (2016) or the “Macho Man” (2017). Preininger’s painting, mostly expressive but also flat, light in the application of paint, bright and clear in the contrasts, are showing characters with an influence of animated motion pictures.

GLOBALCAPITALMEDIATRAFFICTRANSITCONTROL deals with globally widespread urban structures (airports, highways, entertainment zones/malls, media cities …) and with the variable formability, it refers to the interchangeability of structures and topics of our “global age” that are always the same. The individual elements can be arranged like game pieces into ever new global landscapes again and again.

Marlene Stoisser
Paradies, Nr. 2 / Paradise No 2,
aus der Serie / from the series
All that is solid
Acrylic on canvas, 2015

Born in 1984, graduated from the master class for sculpture at the HTBLVA Ortweinschule Graz for Arts and Design and studied at the Academy of Applied Arts Vienna (painting with Johanna Kandl and Emma Redl Denk).

Marlene Stoisser’s characteristic realism draws attention to deserted scenes that exude something ghostly: a packed boat in a meadow, otherwise emptiness – something is not correct. This fundamental discomfort that shapes our time and that arises in view of the motifs, are the breaks Marlene Stoisser is speaking of: “I see an exciting contrast between stability and fragility in these dreary motifs. If I paint these deserted places as romantic landscapes and create an almost cheesy atmosphere by the colour, a kind of break appears. And I am always interested in breaks.”

Born in West Styria in 1964 and graduate at the Vienna Academy of Fine Arts, Matta Wagnest’s artistic work is extremely diverse and complex. Expecially in the 1990s she had an international presence with her conceptual, institutionally and socially critical works (sculpture, installation, performance). Among other things, she takes part in the Venice an Istanbul Biennials and together with Gerwald Rockenschaub she runs The Laboratory in New York. After A phase of conscious retreat, Matta Wagnest is back, and her work now characterized by a strong approach. Her theme is the status of the world, which she contrasts with an attitude of responsibility and respect for nature and people.

Klaus Wanker, born in Graz 1969, studied at the Academy of Fine Arts Vienna with Sue Williams and Adi Rosenblum (term abroad with Siegfried Anzinger in Düsseldorf), diploma in 2000.

At the beginning Wanker opted for a photo-realistic visual language, in order to finally detach himself from the object and apply the medium oil on canvas to subtly differentiated painterly studies at the limits of abstraction. “Klaus Wanker pursues forward-looking vision through painting”, writes Katrin Bucher Trantow (curator at Kunsthaus Graz). In the current series of works, he builds up his pictures form up to forty layers of paint, on this ground he places linear structures he cuts out of schlagmetal. The technoid-like graphic formations – reminding on computer-aided visualizations – appear light and floating. It is a painting in which the media visual habits left their marks. 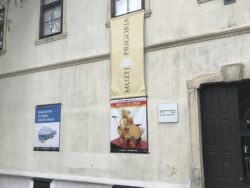 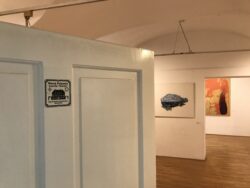 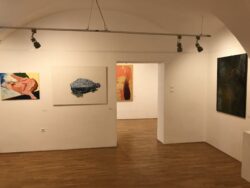 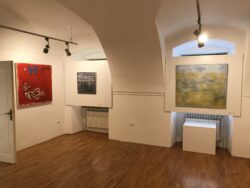 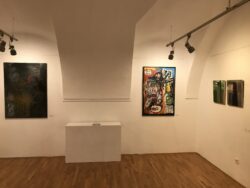 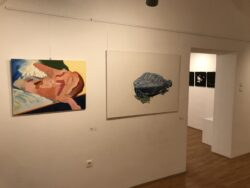 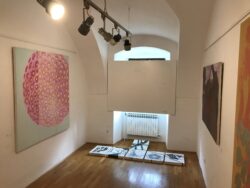 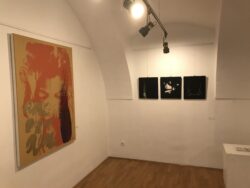 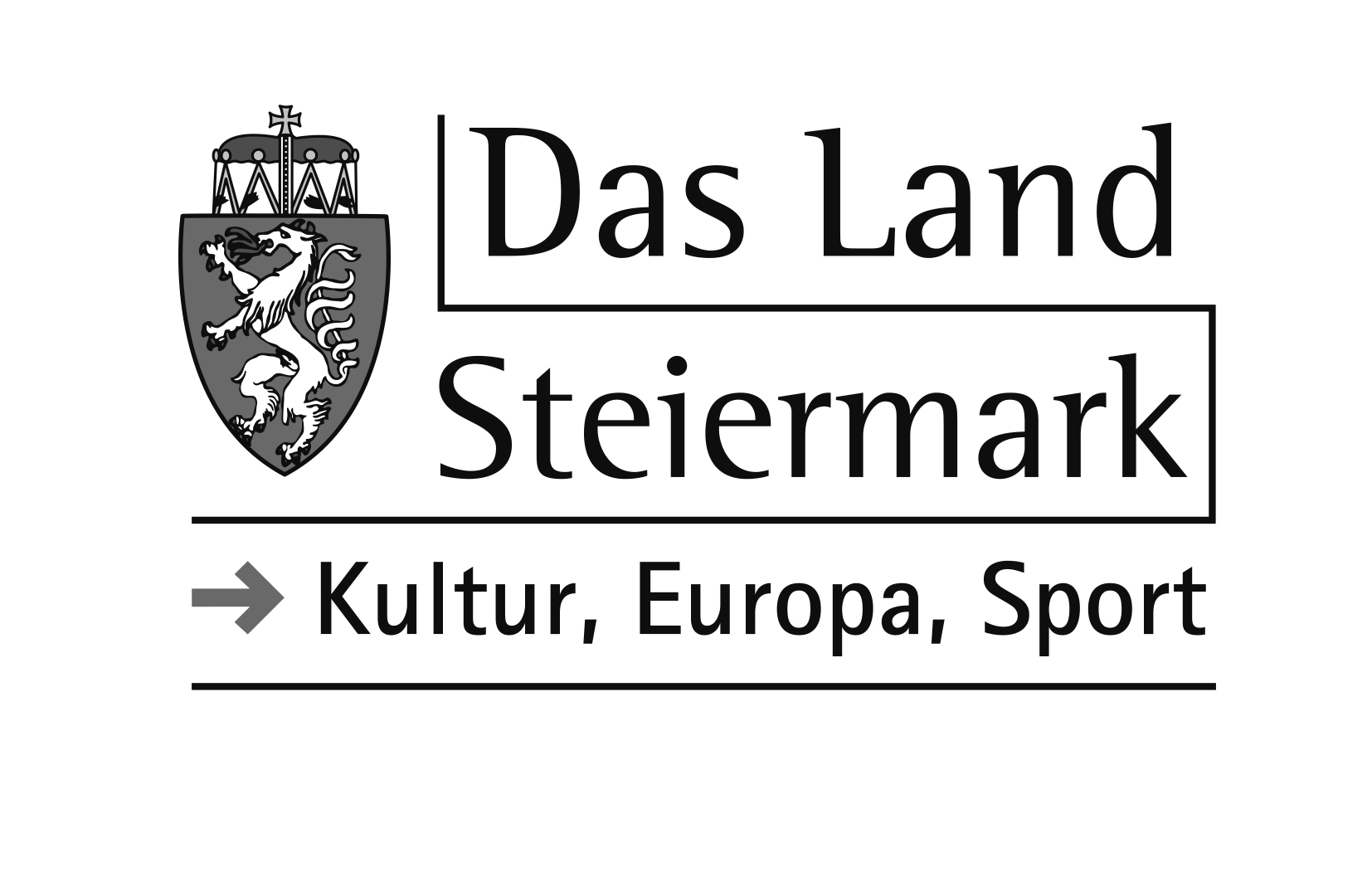